The Highway Code has had a major update which aims to protect more vulnerable road users, including motorcyclists.

Previously, all road users from pedestrians to HGV drivers, were expected to hold the same responsibility for the safety of others – now the bigger your vehicle, the more responsibility you have towards more vulnerable road users. 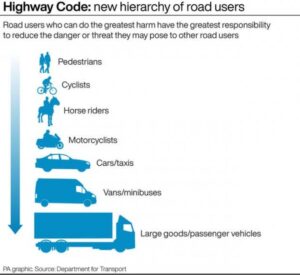 The updated Highway Code, which will come into force on 29th January, includes a Hierarchy of Road Users based on their vulnerability.

Pedestrians are at the top, followed by cyclists, horse riders and motorcyclists.

This is made clear in the Highway Code Rule H1, which now reads: “Those in charge of vehicles that can cause the greatest harm in the event of a collision bear the greatest responsibility to take care and reduce the danger they pose to others.” It’s the opposite of ‘might is right,’ so HGV drivers have to look out for Transits, Transits for cars, cars for motorcyclists, motorcyclists for cyclists, and so on.

There are new rules for drivers and motorcyclists overtaking the more vulnerable – leaving at least 1.5 metres when overtaking cyclists up to 30mph – which should also be reassuring to moped riders in faster traffic.

And if turning left into a minor road, drivers and motorcyclists are expected to give way to pedestrians and cyclists on the pavement/cycleway who are going straight ahead.

“In theory the hierarchy introduced could be beneficial to motorcyclists but we are concerned that cyclists and pedestrians may take it as a right to take precedence. However it is clearly stated that “None of this detracts from the responsibility of all road users, including pedestrians, cyclists and horse riders, to have regard for their own and other road users’ safety.” said Anna Zee, BMF Political and Technical Services Director.

BMF Chair, Jim freeman added “Let’s just hope that the Highway Code revisions encourage everybody to actually read the Highway Code, after they’ve passed their Tests. When was the last time you ever looked at it?,”