Paris has switched on its first noise radar, which can pinpoint cars, motorcycles and scooters exceeding noise limits – and thanks to number plate recognition it should be able to dish out automatic fines to owners. 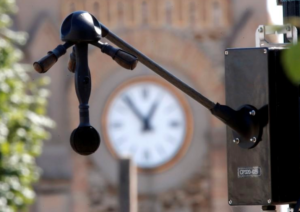 The experimental noise radars first made the news in 2019 but now they are finally undergoing real world testing on the streets. Radars were installed in Lyon and Nice in late January and the first in Paris followed in February, with more to come in other French cities. In this test phase, the radars won’t be issuing fines, but if they work as intended, official approval will come later this year, with fines issued from 2023.

Paris is one of Europe’s noisiest cities, according to a study by money.co.uk in December 2021, with significantly more people exposed to road traffic noise of 55 decibels or more than in London, Rome or Vienna. French police already have the power to test vehicle noise by the roadside and issue fines, but it’s time consuming and labour intensive.

“The problem is that police often have other things to do,” said Fanny Mietlicki, head of the Bruitparif agency that has pioneered the noise radar technology.

“Too much noise makes people sick. For our health and quality of life…this first sound radar’s aim is to automatically issue fines for vehicles that makes too much noise,” Paris’ Deputy Mayor for the transformation of public space & mobility, David Belliard tweeted.

“It’s been a long time coming,” said BMF Chair Jim Freeman, “but it’s hardly a surprise. The old ‘loud pipes, save lives’ expression was always specious – in fact it’s been more a case of ‘loud pipes, lose rights.’ If there’s one association that the public have made with bikes, it’s noise, over many decades. Which is ironic when one considers that we’re at the dawn of the age of the Ebike, whose noise output is, if anything, too quiet. We’ve had negative comments about it, from visually impaired pedestrians, who expect bikes to make some noise. When they don’t, it’s frightening, crossing the street.”