BMW has filed a patent for ‘adjustable air deflectors’ to improve comfort at low speed and aerodynamic efficiency when tanking along. The surprise, given the German company’s love of complex high tech, is that the new system doesn’t use electronics or clever speed sensors – just good old-fashioned springs.

Moto Guzzi’s new V100 Mandello has adaptive bodywork with the same end in mind – moveable flaps in the fairing are flush at high speed, but move outwards into the air stream to reduce turbulence when cruising more slowly. Servo motors move the flaps, controlled by electronics. 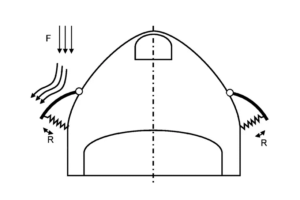 BMW’s system is much simpler. The flaps are hinged at their forward end and held open by springs. The faster you go, the air pressure increases, pushing the flaps back until they are flush with the fairing – BMW says the flaps will be fully open at 30mph and fully flush by the time the bike reaches 75mph. Different spring tensions would make the system easy to tune, according to the bike and its particular aerodynamics. A ‘back to basics’ BMW – who would have thought it?

BMF Chair Jim Freeman said, “That’s amusing, on one level, and encouraging on another. BMW have long been the home of over-engineering, something they share with other companies in the German car industry, but looking back to bikes like the RS boxers of the 20th century, with their superlatively designed fairings, still a benchmark for many of us, this follows in that tradition. Perhaps the engineers who came up with the braking system that forced Euan & Charlie to abandon a bike in Ulan Bator, after a little injudicious stick welding repair, have finally retired?”

In article image courtesy of MCN