It’s a new start-up put together by Will Stirrup, 29, and Seb Inglis-Jones, 31. And the most surprising fact about the Maeving? It’s assembled in Coventry and at £4995 is almost price competitive with its Chinese-made rivals.

The RM-1 is an A1 125cc-equivalent bike with retro 1920s board track styling and removeable batteries. Stirrup and Inglis-Jones started the project back in December 2017, initially intending to import a complete bike from China. After finding there was nothing which quite fitted the bill, they decided to make their own. 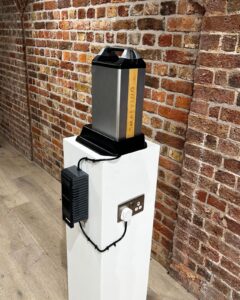 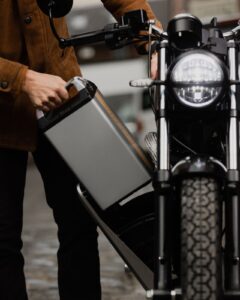 Joined by a team of mostly ex-Triumph engineers, they designed the RM-1, whose key selling point is its swappable batteries, making it suitable for urban flat-dwellers and anyone without access to an off-street charge point. The standard battery offers a range of up to 40 miles, while a second battery doubles that to 80 miles. With a top speed of 45mph, the Maeving is fast enough for 40-limits, but might struggle outside town. A full charge takes three hours, from any domestic socket.

Maeving claims that 65% of the bike is British, though it doesn’t say how that’s measured – the bike’s twin shock frame and battery are imported from China. Closest rivals in the electric A1 class are the Super Soco TC Max (£4499 with spoked wheels) and Horwin CR6 (£4999) though both can manage almost 60mph.

The first batch of 100 Maevings, which have already been pre-sold, will be delivered to customers in May.

“That swappable battery concept is a game changer, as is the charge time, without fancy cables or power point. I wonder what the second battery costs? What could be better, than taking the battery inside, charging it, under the desk, then riding home? Riders of eBikes, as in bicycles, have been doing this for years. It looks terrific too, a combination of ‘bobber’ retro and futuristic. I wish them luck.” said BMF Chair, Jim Freeman.