A track day bike with a claimed 220bhp and a weight of just 129.5kg – giving it a MotoGP style power/weight ratio – is nearing production. 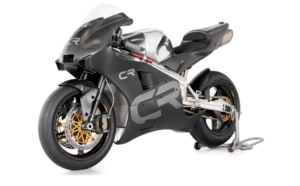 It’s the Crighton CR700, developed by Brian Crighton, the man behind the racing rotary-engined Nortons of the late 1980s and early 1990s. Since then, Crighton has been developing rotary engines for track use.

Development of the CR700 has continued since it was first revealed in October 2021, a culmination of work by Brian Crighton at Dorset-based  Rotron Power, which builds rotary engines for unmanned aircraft and where he will assemble the bike. This first rotary-engined machine for many years has fuel injection, a pressurised gas cooling system plus Crighton’s own ejector exhaust system, which aids cooling as well as boosting power on the hot-running rotary. These changes, plus an increase in capacity to 690cc result in that claimed 220bhp, mated to a six-speed dog-ring gearbox from Nova transmissions, mounted in a Spondon frame.

The Dorset factory is currently being reorganised to enable assembly of the first batch of five CR700s “in the next few months” according to Rotron Power owner Gilo Cardozo. “Brian will assemble 25 bikes over the next two years,” he told the BMF, “and we’re currently clearing space for bike and engine assembly.” 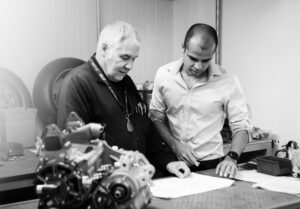 “Fascinating project, just as the world starts adapting to alternative power sources, like electricity, along comes Rotron, with a revival of a technology that was written off in the 1970s. I admire both Brian Crighton for his engineering vision and Gilo Cardozo for his courage and commitment.” said BMF Chair Jim Freeman.

All images courtesy of  Crighton Motorcycles