We’ve had leather, body armour and airbags to protect ourselves in the event of a crash, but now Swedish company Airbag Inside has gone one step further, patenting a safety parachute for motorcyclists. 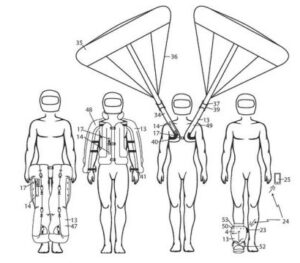 First reported in US bike magazine Motorcycle World, the system aims to slow riders down once they’ve come off the bike and keep them on a straight trajectory. It’s not as daft as it seems – riders who have come off need to lose speed as quickly as possible, slide rather than tumble, and keep out the way of their bike. A parachute could potentially meet all these needs, though the technology looks more suited to racetrack use than the road.

According to Airbag Inside’s patent application, the device wouldn’t look like a conventional parachute, which would open too slowly to be any use and could entangle the rider in its nylon cords. Instead, it has two smaller ‘chutes with inflatable leading edges, which deploy very quickly. The ‘cords’ are also inflated, which makes them relatively stiff and less likely to tangle. Unlike a conventional parachute, which relies on airflow to deploy, the system uses conventional airbag inflation technology – either pyrotechnics or compressed-gas canisters.

“If it works, it would be a game changer. I must admit, when I first saw this, I did check the date; it wasn’t April 1st…” said BMF Chairman Jim Freeman.

Could the bikers’ parachute work? We await the first prototype with interest…

Images by Airbag Inside AB