Power steering for motorcycles sounds like a 1st April spoof, but Yamaha really is working on electric power steering (EPS), with a public debut due this year. It sounds nonsensical because motorcycles, unlike cars, need very little effort to steer – it’s one of the things we love about riding them. 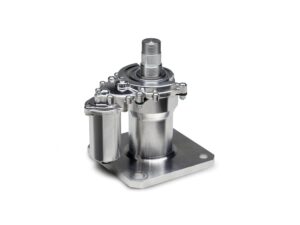 ut the Yamaha EPS system is based on sound reasoning. It’s first being developed for motocross bikes, for which the computer-controlled system improves stability, not just reduces steering effort. At the heart of EPS is an electric torque sensor, of the sort used on millions of electric bicycles. Its job on e-bikes is to sense when you are pedalling and how hard, sending that information to a control unit which in turn tells the electric motor how much assistance you need.

On a motocross bike, the same type of sensor can differentiate between rider inputs to the steering and external forces – such as a serious bump trying to wrench the bars out of the rider’s hands. It measures how much effort the rider is applying to the bars, and sends the info to an actuator in front of the steering head, which applies just the right amount of power to keep the bike pointing in the right direction. In other words, it’s an electronic steering damper.
Yamaha isn’t alone in developing electronic steering for bikes – BMW showed a self-riding R1200GS to journalists nearly three years ago, and Honda has shown Riding Assist concept bikes. Bosch is also working in similar systems.

Although designed initially for motocross, Yamaha’s EPS could also be applicable to circuit racing and road bikes. Yamaha says it plans to: “equip EPS on various motorcycles in order to provide a wide range of riders with greater motorcycling fun, safety and comfort.” It also points out that this is not ‘steering by wire’ – because the standard handlebars and head stock are still in place, the bike could still be steered if the system failed. Taking steering effort out of the equation would make radically different steering geometry possible, and EPS could work with a suite of existing stability control systems such as traction control and cornering ABS.

“When I first heard about these systems, I thought that the manufacturers were collectively missing the point. Cars, especially in modern traffic, are frequently just tedious to drive, so any driver aids were pushing at an open door. Bikes weren’t in the same place; total rider engagement was the point. However, as time has passed, I’d say that anything which can save a potentially ‘lost control’ situation has to be interesting. As a road rider, they will have really cracked it when riding on snow & ice becomes a routine possibility.” said BMF Chair Jim Freeman.

Top and in article images courtesy of Yamaha