Like the idea of a secure motorcycle park, complete with electric charge point and a hydrogen power source? It could be available next year.

Bikers’ Guardian is the brainchild of BMF supporter Jonathan Round, who had the idea after his Honda CBR600 was stolen in Matlock Bath – he had left it for just ten minutes. “I was distraught for days,” he said, “but the theft planted a seed in my head about motorcycle security in town centres.” 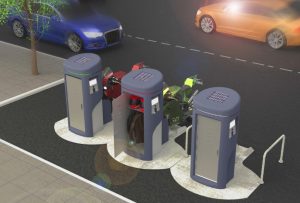 The Bikers’ Guardian, currently still under development, is a free standing unit which locks the motorcycle’s front wheel and monitors the bike on a webcam, accessible by the machine’s owner. An app would allow users to book a time slot for the point, which will be Sold Secure approved.

A key selling point is the ability to act as a charge point for electric vehicles, with electricity generated by a BOC fuel cell, powered by hydrogen. “That means it’s independent of mains electricity,” added Jonathan Round, “so it’s portable and could be installed temporarily at rallies and race meetings.” The initial design also incorporates a locker to store helmets, jackets and boots, and the price is expected to be around £6000-£7000.

So when can we buy one? The short answer is not yet. Bikers’ Guardian is currently seeking crowd funding on Indiegogo, hoping to raise around £70,000 so that prototyping can begin in summer 2021 with a planned launch in January 2022.